ÄÄNI SAUNA is a an art and concert series conceived by Blank Blank and Oslo Badstuforening. The series explore alternative sounds from Finland, creating sensorial experiences with the heat of sauna.

The sixth edition of ÄÄNI SAUNA brings you two days of music! Starting off with a concert by Finnish contemporary music producer and composer Lau Nau at the Dome on Thursday. On Friday Lau Nau will play a live set together with the Norwegian sound artist and composer Alexander Rishaug in the heat of the saunas.

Lau Nau (aka Laura Naukkarinen) works using both acoustic and electronic instruments, from traditional instruments and singing voice to analogue synthesisers and field recordings. While her songs are luminous, melancholic pieces of experimental chamber folk music, her scores for films and sound installations are experimental studies of sound.

Alexander Rishaug creates site-specific sound projects that investigates time, memory, space/place and acoustics with the help of different instruments and technology. Rishaug’s music always carries with it a deeply human warmth that is rich with potential listening pleasure.

Thursday’s concert is free of charge but Friday’s event will require tickets to be bought in advance. Refreshments will be served at the events.

The fifth edition of ÄÄNI SAUNA presents a concert with legendary Finnish singer-songwriter – Joose Keskitalo together with the band The Mystic Revelation of Teppo Repo.

Joose Keskitalo is a bastion of underground folk music and has established himself as one of the most recognized singer-songwriters of this century in Finland. Throughout his active years, Keskitalo has released 12 albums, the latest of which, called Happiness, was created in collaboration with Paavoharju. This autumn, two new albums will be released at the same time, the Orfiset laulut V & VI, which draw inspiration from Greek mythology.

The fourth edition of ÄÄNI SAUNA acts as a book launch for Eyes as Big as Plates 2 – a photographic project by Karoline Hjorth and Riitta Ikonen!

The ongoing photography series Eyes as Big as Plates started out in 2011 studying personifications of nature and folkloric explanations of natural phenomena. It has evolved into a continual search for modern human’s belonging in nature, taking the Norwegian-Finnish artist duo Karoline Hjorth and Riitta Ikonen to five continents on a quest to understand our relationship with our surroundings. The second book in the series features new portraits produced in collaboration with retired wrestling coaches, pub patrons, Sami reindeer herders, Aboriginal uncles, kantele players, librarians, wild boar hunters, and surfers across four continents.

In celebration of the new book, there will be large photos on display, a reception with food and drinks as well as Finnish tango & jenka by Finn Trio. There will also be readings from the book and a possibility to buy your own copy.

For the third edition of ÄÄNI SAUNA, Tuomas Toivonen and Mikael Szafirowski have been invited to perform a combined three hour live set, separately and as a duo for the first time. Tuomas Toivonen is an architect, musician and keeper of Kulttuuri Sauna, a public sauna in Helsinki. Mikael Szafirowski is a Finnish guitar player markedly working on expanding the vocabulary of amplified string instruments. The experimental sounds they create are improvised and imagined for the space around Oslo Badstuforening at Sukkerbiten.

The ‘concert’ will not have a specific stage and audience setting, rather a mobile and wireless installation setting the soundtrack for the whole area, the dock and for the people in motion passing by. The center of sound and attention will take place inside ‘the dome’ Oslo Fjord Hage, right next to the entrance of the saunas at Sukkerbiten.

For the second edition of ÄÄNI SAUNA, Jimi Tenor will perform an outdoors live set specially created for Oslo Badstuforening.

Musician and composer Jimi Tenor has never settled for the traditional role of a pop artist. Tenor has already built a reputation as a fascinating enigma in modern day music. Consistently one of the most inspired and unpredictable live artists around, his work since his breakthrough album ‘Intervision’ (Warp, 1997) had involved open-minded projects ranging from live film soundtracks and orchestral pieces to a series of Afro-based albums with his band Kabu Kabu and with the legendary Afro beat drummer Tony Allen. 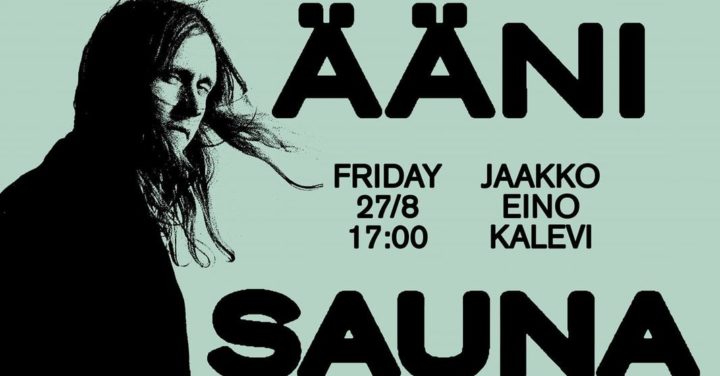 First up in the series is Jaakko Eino Kalevi, a Finnish multi-instrumentalist known for his analogue and electronic sounds. Combining folk, funk, and psych-rock into trippy experimental pop, Jaakko has woven his own style through a unique blend of the textural universe of analogue synths and experimental music.

Jaakko has over the years produced and released a number of EPs, albums and remixes on British Domino records as well on other labels like Beats in Space, Helmi (Finland) and his own label JEKS Viihde. For the first edition of ÄÄNI SAUNA, Jaakko will perform an outdoors live set specially created for Oslo Badstuforening, featuring Kari Kamrud (Farao, Ultraflex).

ÄÄNI SAUNA is an inclusive art and concert series. In case you notice a problem, let the staff know and they will do their best to help you. Unfortunately, the venues are not adapted for wheelchair users.

ÄÄNI SAUNA is supported by the Finnish-Norwegian Cultural Institute.